She rented out the flat I was staying in on Airbnb to make money. There were piles of tourist brochures on the desk. Spare bed sheets in plastic storage boxes. Two sets of knives and forks, two plates, two cups, one saucepan, one frying pan.

I knew this girl so instead of coming to be in the apartment through Airbnb I was staying there because she was my friend who was allowing me to stay, for free, as a favour. I could only stay for a week though because after that she had a lucrative booking.

After 6 days I’d managed to find a job at one of the many English bars in Bordeaux. I hadn’t found my own flat quiet yet though, so I thought I’d try the full Airbnb experience. I booked the cheapest apartment in central Bordeaux from a man called Max.

I knew from his profile pictures that I could trust him:

He gave me the phone number of a guy called Carlos and told me to contact him when I arrived for the keys. I messaged Carlos on the morning of my check-in and didn’t get a reply so I message Max again. He told me Carlos would be at work until 7pm and finally gave me these exact instructions to get into the flat.

I got to the address and sure enough the front door was red and was swinging open. I closed it on entering and realised it didn’t lock. The hallway was dark and I was a little nervous. I went to the first floor and under the black doormat found the key. The apartment had one bedroom and from the looks of things that is where Carlos slept. In the living room were two very thin beds that I pushed together to make a normal sized single bed.

The room was impossibly distasteful in decoration. It made no sense. My favourite features were the curtains that had hundreds of fabric flies sewn all over them. Max had even taken a close-up to show potential Airbnb guests: 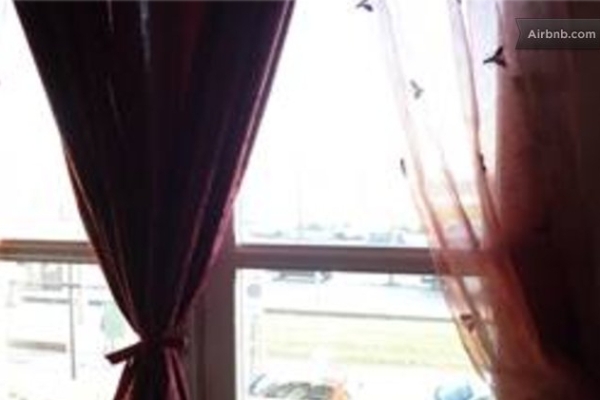 I apologise for not having my camera with me for some better quality shots, but I thought it wise not to take too many valuables to this flat (I’d left my suitcase at my friend’s home). I got used to the decor and the lack of security but one thing I couldn’t get used to was the shower.

You may think I’m just overly middle-class but I’ve lived in a flat with this type of shower before. Me and my flatmate nicknamed them ‘sit-down’ showers. Its the type of shower where you just have a bath with a showerhead attached to the taps but there is no wall socket to allow you to shower ‘hands-free’. Here there was a shower curtain at least, unlike at my old flat, meaning that I didn’t actually have to sit down chez Max.

During my three-day stay I met Carlos once. He was staying there for a few months while doing an internship at an architects firm. I never met Max but assumed he was just some geezer making money by renting out the apartment to 2 or 3 people at a time. The accommodation was acceptable for €19 a night but when a fellow barman, from the pub I’d found a job in, offered me his couch I decided to take him up on the offer. Even though he also had a ‘sit-down’ shower.

This all got me to thinking about how Airbnb must have given rise to a new breed of rentable accommodation, blurring the lines between bed-and-breakfasts, holiday apartments, hostels, dodgy sublets and staying with friends. With it must’ve come a new kind of businessperson, a sort of part-time landlord.

I wonder if Airbnb is especially popular in France? Because they claim that in Paris: From May 2012 to April 2013, guests and hosts utilizing Airbnb have contributed €185 million in total economic activity in the past year. It has also made me wonder how much impact Airbnb has had on hostels and other such businesses?

2 thoughts on “A short-term stay with Airbnb”