I openly admit that I really like shopping online… I’m even happy to tell people that I like Amazon, even though they are a big mean ol’ monopoly that destroys indy book-stores etc, etc. I’m just well into receiving things through the post, and not having to leave my flat, and not having to walk around in the daytime in shops full of shoppers. And I don’t even have to type any numbers into Amazon or anything, it knows all my debit card details already, so that’s cool… I think.

After using the website Leboncoin to buy a second-hand bike and subsequently having it stolen and realising I couldn’t report that to the police because I had no proof the bike was mine in the first place, I decided to buy something from a shop. I looked in all the bike shops in Bordeaux but nowhere seemed to offer me value for money. It was time to do what the English do best (apparently): shop online.

I can’t remember how exactly I came across the KS Cycling website but I think I used a search term like ‘Buy cheap single-speed bike online France’ or something along those lines. Anyway it turned out they make all kinds of affordable bikes. Look at this Harley Davidson inspired model for example.

But I had my sights on something a little less jazzy. I wanted something similar to my previous single-speed Chok Vélo. I liked the fact that KS cycling called single-speed bikes Vélos Fitness, and asked ‘Vous cherchez un vélo Fitness pour rester en pleine forme ?’

I had a good feeling about them as a company.

But when I got to their checkout I panicked: I had to fill in a form and type in my card number. Argh! I decided to see if they sold through Amazon… and it was my lucky day, they did, they weren’t stupid (If you can’t beat them: join them). I bought this naughty little number for just over €200 with free delivery. 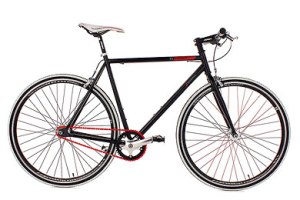 I received the huge parcel very quickly, in fact I’d gone to the beach the day it arrived because I hadn’t expected it to arrive that soon. Thankfully I’d ordered it to The Sherlock Holmes pub (where I work) so I picked it up and assembled it in the evening. I took some photos of it in its box and me putting it together but I can’t find these photos anywhere now. Sorry. I also lost the one photo I took while at Arcachon, which was of the outside of the (closed) aquarium and a mysterious tail in the otherwise empty pool in the creepy patio in front.

Yo! So before this I had a similar bike but this one suits the town I live in better because it feels less delicate (the downside of this is that it is slightly heavier). The streets in Bordeaux can be rough and some are cobbled. Even though it looks like the tyres are slick on this bike they are in fact larger and grippyer than standard racing tyres. It is a very tough bike and after having ridden it hard everyday for over 3 months I haven’t had a single problem.

Its real smooth, it rolls pretty much silently.

I did oil it up a little at the start so I’d advice buying some WD-40 when purchasing a KS Cycling bike online.

The assembly instructions weren’t very helpful, as they aren’t product specific, instead they are just kind of general and lame! It didn’t take too long to figure out though.

I believe this type of bike is known as a flip-flop which means you have the option of turning it into a fixie by flipping the back tyre over. But I prefer to break using the breaks and I’ve heard that if you ‘Go fixie’ and use the chain as a break then you go through chains like nobody’s business

The breaks are good.

Here is a picture I took today of the complete model with the addition of some new lights. 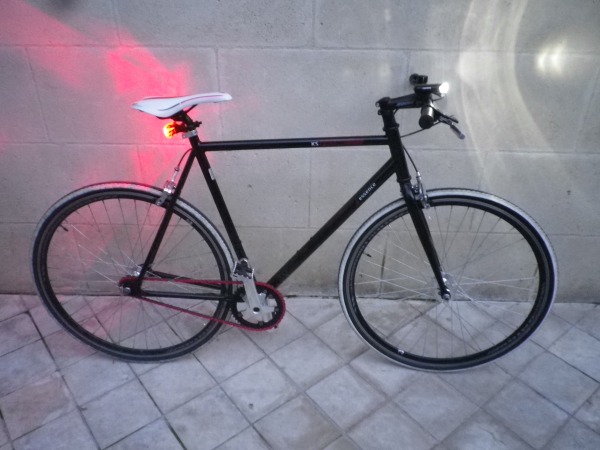 9 thoughts on “Buying a bike online (from Amazon)”